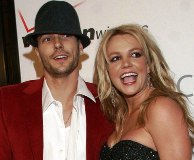 Today, as we were all checking the appropriate boxes on our ballots (or touching the screen if you were as cool a voter as I was), Britney Spears, 24, was checking the ever popular “irreconcilable differences” box on her divorce petition, with yesterday as the date of separation. Can it be true? Has the fairy tale come to an end? (Kevin’s fairy tale, that is) Poor little K-Fed, he really screwed this one up. Did he not realize that he won the lottery when Britney Spears married him? You have to be pretty dumb to mess that up. Of course, Britney is no member of MENSA herself. But try as I might to find something witty to say, I just can’t help but feel sorry for her. Sorry that she’s human like the rest of us. Sorry that when she makes mistakes (and Kevin was a HUGE one), she has to do it in front of millions of people. She’s young, she’ll bounce back. I know single mothers with two kids who have a hell of a lot less money than Britney Spears, and stupid ex’s like Kevin Federline, and are managing just fine.

I can’t say that I am at all surprised, they are both quite young after all. It’s very rare these days for young married couples to stay married. There is so much growing and changing going on; one can hardly expect to be the same person at 30 that they were at 20. Throw Hollywood into the mix, and you’re basically screwed from the “I Do’s.”