Like so many other couples in Hollywood, Eva Longoria, 31, and Tony Parker, 24, are “thrilled to announce” that after “dating steadily for two years,” they are “officially engaged,” says Longoria’s rep, Liza Anderson.

Parker, a point guard for the San Antonio Spurs, was born in Belgium and raised in France; which, according to Eva’s rep, is where they plan to wed next summer.

The pair met for the first time in the locker room after a Spurs’ game in November 2004.

This will be the second marriage for Eva Longoria, who divorced actor Tyler Christopher (General Hospital) in 2002 after two years of wedded bliss.

I think it’s only fitting, given Tony Parker’s profession, that we start placing bets on how long this marriage will last. If they actually make it down the aisle, that is. 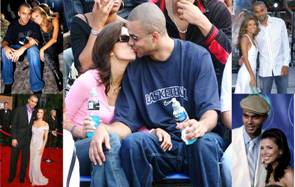 He was the 28th pick of the first round in the 2001 Draft by the San Antonio Spurs.

Tony was the youngest player to play for the Spurs, at 19 years of age.

Tony Parker appeared in more playoff games before his 24th birthday than any other player in NBA history.

On his first date with Eva, he took her to IHOP.