Although his rep says that Keith Urban, 39, is “still undergoing treatment,” the country singer is out of rehab. He and his wife of only five months, actress Nicole Kidman, 39, enjoyed Sunday brunch yesterday at the Polo Lounge in Los Angeles. It was the first time they had been seen together since November 12th, when they were photographed strolling the grounds of the Betty Ford Center in Palm Springs.

This is the second time Keith Urban has checked himself into rehab. In 1998, he sought help for both alcohol and cocaine addiction from the Cumberland Heights treatment center in Nashville, Tennessee.

Keith Urban and Nicole Kidman were married in Sydney, Australia at the Cardinal Cerretti Memorial Chapel in the grounds of St Patrick’s Estate, on June 25, 2006. The two native Australians met in January 2005, at a Hollywood event honoring Australians. 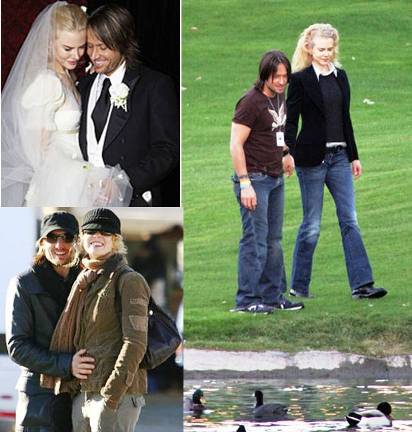 In 2001, Keith Urban won “Top New Male Vocalist Award” at the Academy of Country Music Awards and the Country Music Association’s “Horizon Award.” Also that year, he appeared partially nude on the cover of Playgirl magazine.

In August of 2006, Keith Urban’s hit “Once In A Lifetime” made history when it became the highest-debuting country single in the 62-year history of Billboard’s country charts. It debuted at number 17.