Have you ever known people, or a couple, that – try as you might – you just couldn’t hate? Most recently, Tom Cruise and Katie Holmes are the ones at the top of my list. I can’t really put my finger on why they bug me – they just do. I’m sure that it has something to do with the fact that Tom Cruise brainwashed Katie Holmes and impregnated her with his alien spawn. Or the fact that Tom Cruise doesn’t believe that the human brain can have a chemical imbalance. Or that Katie Holmes seems to have forgotten all words except for “wonderful,” “excited,” and “happy.”

All I know for sure is that TomKat seems to have the ability to intrigue me, while at the same time make me squirm in my seat. And every time I think I’ve gotten to a point where I can comfortably dislike Tom Cruise and Katie Holmes, a picture like the one below surfaces, and makes it virtually impossible for me to continue with my repugnance. How rude of them! 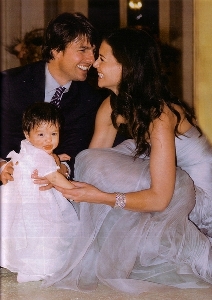 Ok, I’ll admit it — but only this one time. Suri Cruise is a cutie.

Suri, commonly called “TomKitten” by the media, was born on April 18, 2006, at Saint John’s Health Center in Santa Monica, California…

Before her birth, many media outlets questioned the authenticity of Holmes’ pregnancy. After she was born, Suri’s birth certificate was found to contain some incorrect information. Then, when there were no images of the infant for a few months, people questioned the actual existence of a child, which continued until the first images of the child were published in Vanity Fair.