PEOPLE magazine is reporting that Jennifer Aniston, 37, and Vince Vaughn, 36, have officially broken up. Which implies that it was actually a real relationship, and not just a publicity stunt. Rumors have followed the pair since they were first pictured together in Chicago while filming The Breakup in the summer of 2005 — everything from having a fake relationship, to breaking up, to even being engaged.

In an exclusive conversation, Stephen Huvane and John Pisani, (reps for Aniston and Vaughn) told PEOPLE magazine that, “After Jennifer’s trip to London several weeks ago, Jennifer and Vince mutually agreed to end their relationship but continue to be good friends today.”

Aniston’s short trip to London came after the two spent almost a month away from each other, and on the heels of much speculation that they were ‘on the rocks.’ Just before her trip, Jennifer Aniston told Oprah Winfrey that she and Vince Vaughn were still an item. Actually, she sort of just nodded her head and looked away (I’m sure body language experts ate that up).

Also in October, Vince Vaughn threatened to sue several tabloids after they ran articles and pictures alleging that he had been seen kissing a mystery blonde in London, where he is filming Fred Claus.

I would say that I’m surprised that Jennifer Aniston and Vince Vaughn broke up, but that would make me a liar. Vince was Jennifer’s rebound through and through. 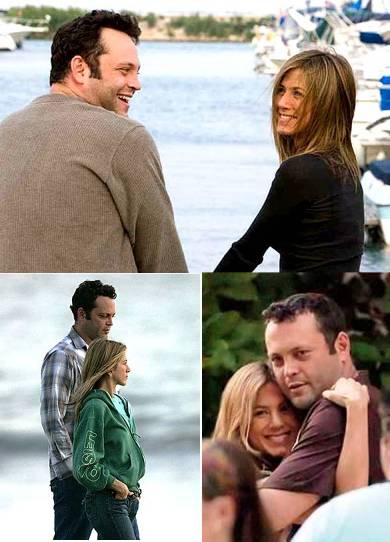