Courtney Love, 42, is clean and sober now; one of the best decisions she’s made in her life of wrong ones. When referring to Britney Spears on the TV magazine show, Extra, Courtney said, “Say what you will about me, and I’m not passing judgment, but when I had my daughter, I stayed home with her almost every night for the first year of her life.”

Ooh, burn! You know you’re doing something wrong when Courtney Love, of all people, can out parent you.

I’m really happy that Courtney has turned her life around and is heading down a better path. I hope it sticks this time. Frances Bean is a teenager now and needs her mother more than ever; especially since she doesn’t have a father. 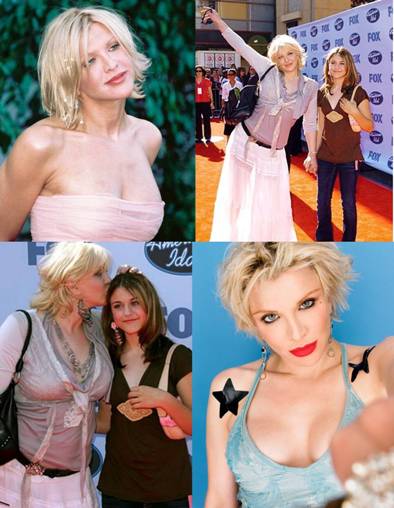 By the way, rumor has it that Britney Spears is being investigated by child welfare services again.

As a little girl, Courtney signed up for The Mickey Mouse Club, but was rejected.

Courtney got her first instrument when she was 18; it was a Casio keyboard.

She has stated that she still writes letters to her late husband, Kurt Cobain.

Courtney has also stated that she and Melissa Auf Du Mar once did cocaine with (“a naked”) Kate Moss and (“a naked”) Naomi Campbell.

In 2004 Courtney did an imitation of her friend Drew Barrymore while appearing on The Late Show with David Letterman. She got up on David Letterman’s desk and flashed him full frontal nudity.

Courtney then got into a bar fight (which later lead to an arrest) only hours after her 2004 flashing of David Letterman.