During the wee hours of Monday morning, while most of us were snuggled in bed, dreaming of our subconscious desires, Nicole Richie was in Burbank, driving the wrong way on Highway 134.

Two drivers called 911 after seeing the black Mercedes SUV and when officers arrived, Nicole Richie was stopped in the carpool lane, talking on her cell phone. She admitted to taking Vicodin and smoking pot, according to the report. A test done on the scene determined that Nicole was not under the influence of alcohol.

Nicole Richie was booked at 4:50a.m., standing 5’1” and weighing a nauseating 85 lbs, and released at 7:15a.m. According to one source, Nicole was “very cooperative and very humble” while at the jail. 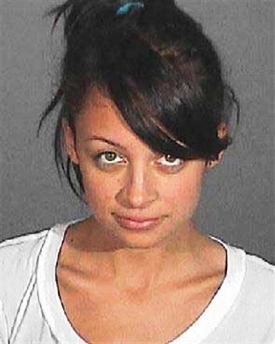 Vicodin is a combination of acetaminophen and hydrocodone. Hydrocodone may be habit-forming and should be used only by the person it was prescribed for. Keep the medication in a secure place where others cannot get to it. Vicodin can cause side effects that may impair your thinking or reactions. Be careful if you drive or do anything that requires you to be awake and alert. Drugs.com

VICODIN contains hydrocodone, an opioid agonist, and is a Schedule III controlled substance. VICODIN, and other opioids, used in analgesia can be abused and are subject to criminal diversion.