Jennifer Hudson first made her mark on American Idol. Now she has joined the Hollywood elite with today’s Golden Globe nomination for Best Supporting Actress, for her role in Dreamgirls. Although Beyonce Knowles is “the bigger star”, it is Jennifer who has the strongest song in the movie. Congratulations Jennifer Hudson! Suck on that, Simon Cowell! 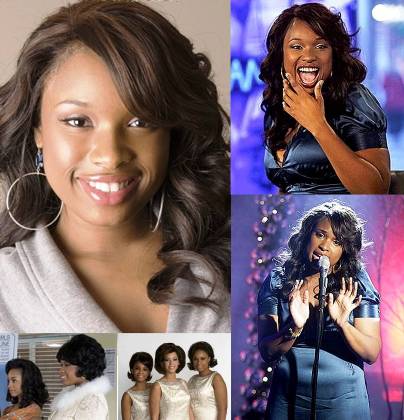 Jennifer was advised to slim down on her season of American Idol, but was asked to put on extra weight for her role in Dreamgirls.

She beat out over 800 actors and singers, including American Idol winner Fantasia Barrino for the role of Effie White in the film Dreamgirls.

Jennifer is only the third African-American woman to appear on the cover of Vogue, as of the March 2006 issue.

Jennifer attributes her singing ability to her late grandmother, Julia Kate Hudson, a long-time member of her church’s choir.

She honed her vocal skills through dozens of musical productions, talent shows, church socials, and family gatherings that she performed for all through her school years.

Jennifer has a five octave range, leading her to be compared to such greats as Whitney Houston, Patti Labelle, and Jennifer Holliday.