– Leonardo DeCaprio, Best Actor for Blood Diamond
“I’m honored to receive this nomination from the Academy – especially in a year full of such worthy nominees. … I am also thrilled for Djimon [Hounsou], Mark [Wahlberg] and Marty [Scorsese] who are all so deserving of this recognition.”

– Will Smith, Best Actor for The Pursuit of Happyness (in a statement)
“Congratulations to all of the nominees. It is a great honor to be considered among this caliber of performers. No competition, all celebration. Let the parties begin.”

– Dame Judi Dench, Best Actress for Notes on a Scandal, in a statement
“I’m very pleased. I’m in frighteningly good company. It is very nice of the Queen to allow me in for a minute.”

– Helen Mirren, Best Actress for The Queen, to PEOPLE
“It was such a delight. People had been intimating about the possibility and that had been a surprise, but it was an absolute delight. Not just for me personally but more than that, for the film itself which got six nominations. That is really, really extraordinary for a film of that sort of budget. It says so much for the American public and the American film industry that they would nominate it.”

– Meryl Streep, Best Actress for The Devil Wears Prada, in a statement
“I am thrilled in a way that no one can possibly imagine. It’s extraordinary that anyone in the actor’s branch is even speaking to me, nevermind nominating me yet again. I’m very, very grateful.”

– Kate Winslet, Best Actress for Little Children, to Variety
“I’ve been laughing, crying, hollering, whooping and leaping around. …This isn’t supposed to happen to a girl who grew up in a tiny town. I was told the only way I’d have a career as an actress would be if I could settle for playing fat girls.”

– Mark Wahlberg, Best Supporting Actor for The Departed, to Variety
“I was able to put my real-life experiences with the Boston police to good use after all. After all the torture I have put them through, to know they cried happy tears today – I’ll think about that for a while.”

– Jennifer Hudson, Best Supporting Actress for Dreamgirls, on the Today show
“I’m sitting here in shock right now. I can’t believe it. To be able to be here today and be a part of such greatness, there are no words for it. It’s hard to even get past this moment right now. I don’t want to get to crying, but this is so far beyond anything.”

– Rinko Kikuchi, Best Supporting Actress for Babel, to PEOPLE
“I was just really stunned, to be honest with you. I called my mother in Tokyo. She said: ‘I’m very, very, very happy.’ I guess my family already heard the news right away. They were just in a state of joy. And that made me very happy.”

This year YOUR VOTE COUNTS!

Okay, well maybe your vote doesn’t count at all, but it’s still fun to see how your choices compare to others, including an Oscar expert. Oooooh… 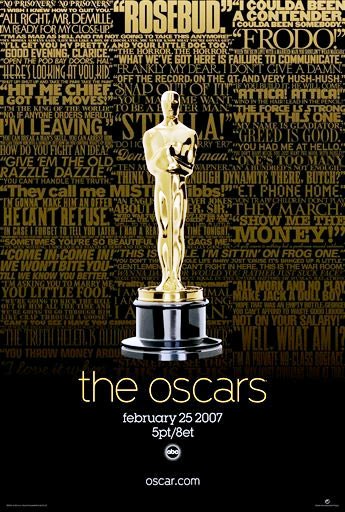