I’m so glad I found this! It was one of the better commercials during the Super Bowl last Sunday.

The story goes that Oprah Winfrey and David Letterman have been in somewhat of a feud for years. I’m not really how it’s said to have started. I think it’s because Oprah said that Dave made mean jokes about her years and years ago.

Whatever the reason, they finally made up* in 2005 and now they love each other more than ever before. It’s quite sweet, really…

* Oprah Winfrey and David Letterman buried the hatchet [Dec 5, 2005) on “The Late Show” and wondered just how their 16-year feud started in the first place.

“Could you tell me please what has transpired?” Winfrey asked Letterman during the show. “I have never for a moment had a feud with you.”

Letterman has frequently joked about Winfrey through the years, and he devoted plenty of time [during the] week to hyping the Thursday appearance. In 2003, Winfrey told Time magazine she wouldn’t go on his show because she’s been “completely uncomfortable” as the target of his jokes.

“I can’t thank you enough,” Letterman said Thursday. “It means a great deal to me and I’m just very happy you’re here.” 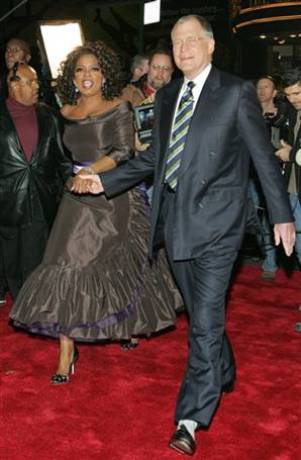