Anna Nicole Smith is dead! Holy crap! Can it really be? The world will never be the same.

Perhaps I’ve watched too many Soap Operas over the years, or maybe I’m just oddly overly creative, but I’m guessing there’s more to this than we think.

Here’s my theory on the whole mess…

Howard K. Stern got Daniel hooked on drugs, and ultimately killed him. He also got Anna Nicole addicted (which I’m sure didn’t take much arm twisting). All in an attempt to weaken Anna Nicole and get her money. Having a biological child with Anna doesn’t hurt either.

But here’s the rub…

So here’s what’s going to happen next…

Howard K. Stern will be arrested. A paternity test will be done on the baby and will show that Larry Birkhead is the true father. Howard K. will go to jail and Larry will get Dannielynn. The Supreme Court will finally rule on Anna Nicole’s case, granting her millions of dollars. The money will go to her daughter.

Larry will have Dannielynn and some of Anna’s money to boot. Howard K. will be in jail. And sadly, Daniel and Anna Nicole will still be gone.

I wonder what will happen with the new TrimSpa lawsuit.

I saw that she had collapsed as I was on my way out the door to go to therapy. On my way there, my friend called me and told me Anna had died — it was on CNN and everything. Well! I was very conflicted. Didn’t know whether I should turn around and go home and get on this story, or continue on to the doctor’s. This almost made me panic — all the more reason for therapy. HaHa.

Long story short, I went to therapy but couldn’t wait to get home.

For more information on the life and death of Anna Nicole Smith, visit TMZ.com or Hollywood Grind 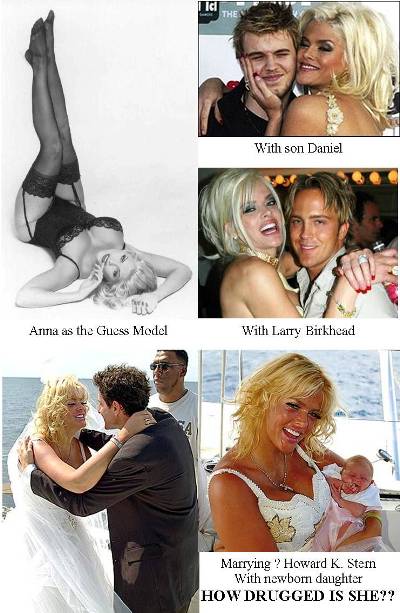