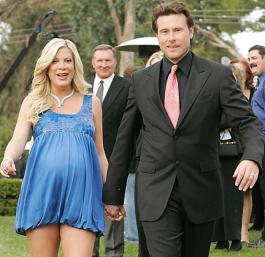 My sister’s baby was due on Sunday (the 11th), but it has yet to make an appearance. I’m so excited about being an auntie! I won’t get to the see the baby in person until next month, but thank goodness for digital cameras and email!

Liam:
This name is a short form of the Irish name Uilliam (William) which is now use independently as a given name. As a Hebrew name, Liam means “my people; I have a nation”.

Who the heck is Dean McDermott, anyway?

Dean was married to Mary Jo Eustace from July 1993 until February 2005. They had two children together; son Jack born in October 1998 and daughter Lola born in July 2005.

Dean’s ex-wife, Mary Jo Eustace wrote a tell-all book about their marriage. It is titled My Husband Left Me For Tori Spelling. Mary Jo reveals that Dean cried poverty when she asked him to help pay family bills, although at the same time, he could get an elaborate tattoo of Tori’s face etched onto his arm.