Our favorite red headed Hollywood drunk has been seen out and about lately, partying like a rock star. Exactly what a person should be doing right out of rehab, don’t you think? Although Lindsay Lohan has not recently been photographed with booze in her hand, she has taken up chain smoking and a nice addiction to Red Bull. But don’t worry, she’s still showing off her lady parts. It’s nice to know a stint in rehab doesn’t change everything. What would the world be coming to if Lindsay Lohan stopped flashing it everywhere she went? It would be a sad world indeed. 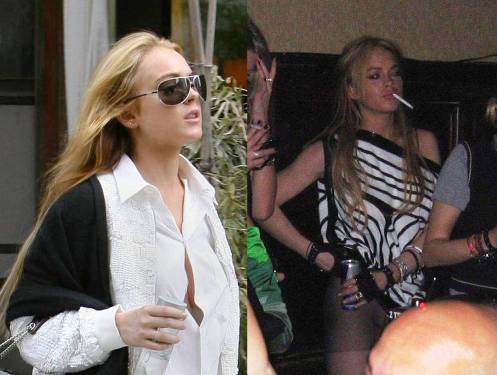 Exhibitionist:
1. someone with a compulsive desire to expose the genitals 2. someone who deliberately behaves in such a way as to attract attention. Dictionary.com

Exhibitionism is a mental disorder characterized by a compulsion to display one’s genitals to an unsuspecting stranger…under the heading of the “paraphilias,” a subcategory of sexual and gender identity disorders. The paraphilias are a group of mental disorders marked by obsession with unusual sexual practices or with sexual activity involving nonconsenting or inappropriate partners (such as children or animals). The term paraphiliais derived from two Greek words meaning “outside of” and “friendship-love.” MindDisorders.com