By now, I’m sure you’ve heard that Lindsay Lohan was photographed passed out in the front seat of her friend’s car (just two days after her DUI arrest, mind you), and that Britney Spears wrote a letter to her fans claiming that she hit rock bottom in rehab. The same rehab facility that Lindsay is rumored to have entered today, by the way.

Honestly, I don’t even know what to say anymore. I’m disgusted by the fact that these girls’ parents aren’t whooping their butts, and saddened at the thought of how pathetic their lives must really be.

But I have to ask myself, are their lives sad because people like me put them in a fish bowl and pick apart everything they do, thus creating an impossible ideal for them to live up to? Or were they predestined to take a hard road, no matter how rich or poor?

If they had not risen to fame at such young ages, would they be where they are today? What separates young stars like Lindsay and Britney from their peers, like Christina Aguilera and Mandy Moore? Their parents? Their level of fame? The public’s level of fascination with their lives?

Is it just the way the cards fell? Victims of circumstance.

Or are they just attention seeking whores? 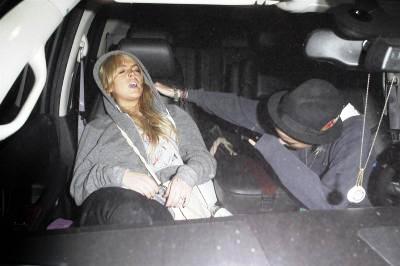