Paris Hilton is in jail today. Where she belongs. She spent her last night of freedom (for 3 weeks) attending the MTV Movie Awards last night. While being interviewed on the red carpet, Paris said that she was ready to serve her sentence and hoped that she would be a role model to others. She did not however, admit what she had done to deserve her jail time.

Hotel heiress Paris Hilton surrendered herself to the Century Regional Detention Facility last night (Sunday) at 10:30pm where she was booked and transported to the women’s facility.

It’s crazy to think that only hours earlier she was on the red carpet at the MTV Movie Awards, wearing a strapless black dress. “I am trying to be strong right now. I’m ready to face my sentence. Even though this is a really hard time, I have my family, my friends and my fans to support me, and that’s really helpful.”

After turning heads at the award show, Paris headed over to the jail to check in. And from all accounts, she was a perfect lady. “Her demeanor was helpful. She was focused, she was cooperative,” said sheriff’s spokesman Steve Whitmore. 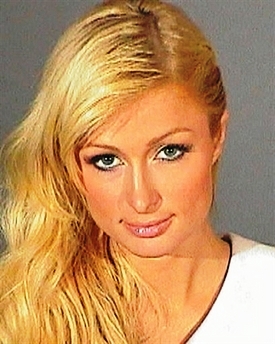