*Paris Hilton has removed her contacts. Did you know her eyes are actually brown?

*Paris is also not wearing any makeup and apparently is getting a positive response to it from the other inmates. I wonder if she will continue this look when she gets out.

*She has been visited by both her psychiatrist and her lawyer.

*To pass the hours, Paris has been reading a book. The ratio of pictures to words is unknown.

*On the up side, she is sleeping more and was able to take a private shower.

*But on the down side, she had to endure a cavity search when she was being checked in. Why do I have the feeling this was not her first one? 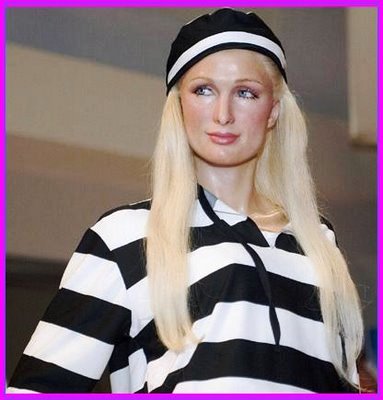 *Body cavity search: either a visual search or a manual internal inspection of body cavities for prohibited material (contraband), such as illegal drugs, money, or weapons. It is far more invasive than the standard strip search…

… Suspects and inmates can be highly creative in using their bodies to conceal contraband. For example, objects may be concealed by inserting them in the rectum. Illegal drugs can be placed in condoms and temporarily stored in the colon. Cylinders such as cigar tubes are used to hide money, intravenous syringes, and knives. Duplicate handcuff keys can be concealed in most body orifices. These goods are considered valuable inside a prison and can pose a security risk to staff and inmates at such facilities.