I don’t know about you, but I woke up this morning wondering what Paris Hilton was up to.

Around 11:00 p.m. last night, she was transferred from the medical ward back to the all-women’s jail she started her sentence in over a week ago.

Hilton, who was being treated for an unspecified medical condition at the Twin Towers jail medical center, was moved to the Century Regional Detention Facility in Lynwood, Calif., at about 11 p.m. last night, department spokesman Steve Whitmore told ABC News.

Whitmore described Hilton’s condition as “stable” and said the hotel heiress was placed in Lynwood’s medical clinic, where she would continue to be monitored. She will return to the jail’s special needs unit, where she was originally housed, if her condition continues to improve, he told reporters. Hilton Transferred From Jail Medical Ward – abcnews.com

Sources close to the heiress fear that she will not be able to handle this transfer, claiming that she is suffering from panic attacks.

Oh boo hoo, Paris. You’re in jail! I think that’s an excellent place to start having panic attacks. Maybe they’ll knock some sense in to you.

And if not, you can always look to your new friend God for support. 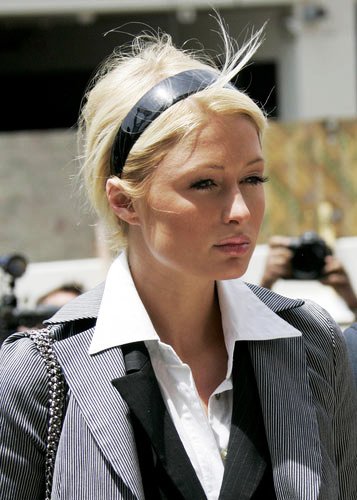