Some sad news to report….

Oprah Winfrey’s two year old golden retriever, Gracie, has died. It’s being reported that the cause of death was choking.

I would simply die if something like that happened to my dog.

“Weeks have passed,” Winfrey says in the August issue of O, the Oprah Magazine. “And the pain has not subsided. Every time I think about it, my heart starts racing and I feel like I just got stabbed in the chest.”

On May 26, Gracie choked to death on a plastic ball that belonged to Sophie, Winfrey’s 12-year-old cocker spaniel, while out with her dog walker and two other golden retrievers, Winfrey says.

“I ran barefoot out of the house and found the dog walker and one of my security guys pumping her chest,” Winfrey, 53, recalls. “Just as I reached them, the security guy looked up and said, `I’m sorry, ma’am. We tried everything. I’m sorry. She’s gone.'”

Winfrey (who “stood there dazed, stunned, crying” as Gracie was placed in a golf cart) says she learned this lesson: Enjoy life but remember to slow down, too.

“She never stopped moving. Was energy in motion… I have never seen a being, human or animal, always so full of joy,” Winfrey says of Gracie, who ran amok and gulped food and treats. “This dog lived every moment as though it were her last.”

Winfrey says she “got the message” to slow down and catch her breath when Gracie died.

“I don’t believe in accidents,” says the host of “The Oprah Winfrey Show.”

“I know for sure that everything in life happens to help us live.” 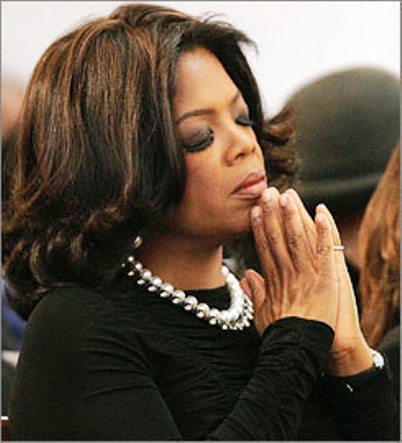