George looked at Laura, chuckled and said, “You know I could throw a thousand dollar bill out of the window right now and make somebody very happy.”

Laura shrugged her shoulders and replied, “Well I could throw ten one hundred dollar bills out the window and make ten people very happy.”

Cheney quickly chimed in with, “That being the case, I could throw one hundred ten dollar bills out of the window and make a hundred people very happy.”

Hearing their exchange, the pilot rolled his eyes and said to his co-pilot. “Such big-shots back there. @@@@, I could throw them all out of the window and make 56 million people very happy.” 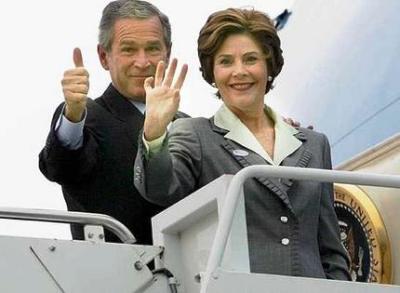 What is Air Force One?

From the White House Military Office:

The current presidential fleet consists of two specifically configured Boeing 747-200B series aircrafts…when the President is aboard either craft, or any other Air Force aircraft, the radio call sign is “Air Force One.”

While on the aircraft, the President and staff have access to a full range of services, including communications systems, secure and non-secure voice, fax and data communications, along with access to photocopying, printing, and word processing.

From How Stuff Works:

Air Force One has 4,000 square feet of interior floor space. Much of it looks more like a hotel or executive office than a jetliner, except for the seatbelts on all the chairs. The lowest level of the plane mostly serves as cargo space. Most of the passenger room is on the middle level, and the upper level is largely dedicated to communications equipment.

The president has onboard living quarters, with his own bedroom, bathroom, workout room and office space. Most of the furniture on the plane was hand-crafted by master carpenters.

The staff meets in a large conference room, which doubles as the president’s dining room. Senior staff members have their own office area, and the rest of the president’s staff also has space to work and relax…a separate area for reporters traveling with the president…plenty of room for the flight crew to do their work…Air Force One can comfortably carry 70 passengers and 26 crew members.