Carol Channing’s dress is missing. While the 86-year-old actress and her husband checked into the Hollywood Renaissance Hotel, someone made off with the signature dress she wore in the stage production of “Gentlemen Prefer Blondes.”

…a man swiped one of her bags from a bell cart in the lobby, said Officer Jason Lee, a police spokesman. The bag contained the dress, which Channing told police was valued at $150,000, Lee said…

I wonder of OJ Simpson took it. Looks like the wrongly not-convicted murderer has been up to some more illegal activity lately.

…O.J. Simpson says he went into a casino hotel room only to retrieve memorabilia that he felt was stolen from him. But police are investigating it as an armed robbery and named the fallen football star as a suspect… International Herald Tribune 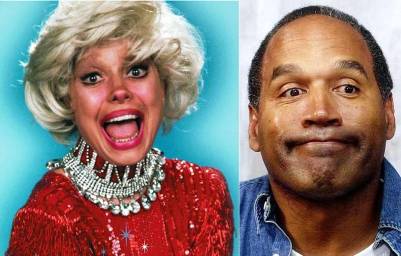 Carol has been married four times.

Carol’s fourth husband, Harry Kullijian, had been her high school sweetheart. They reunited after she mentioned him in her autobiography, and married on May 10, 2003, when Carol was 82 years old.

Carol revealed in her autobiography “Just Lucky, I Guess,” published in 2002, that her father was a light-skinned African American who passed as white.