It’s a wet Saturday morning in my neck of the woods. Which is fine, except I have a turtle living in a kiddie pool in my backyard without a heater.

Any suggestions on how I can make a better outdoor fall/winter home for my turtle without it costing an arm and a leg?

Here’s a picture of the little guy back in March. He’s a little bigger now. 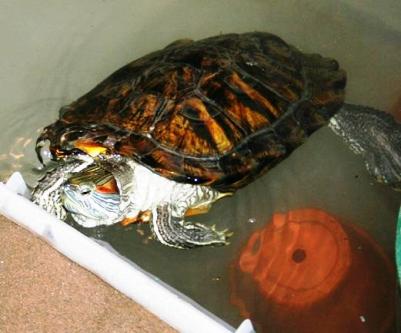 I’m off to the Bay Area today to have lunch with my Grandma at her new apartment. She’s had to move into an assisted living place, which kinda sucks, but it’s a really cool place. She lives in the ‘John Wayne Suite’ in the Old Hollywood wing. How perfect is that? For me, anyway.

When his little brother was born and given the name Robert, Marion’s name was changed to Marion Michael Morrison.

His nickname was “The Duke.”

He played football for the University of Southern California.

He won an Oscar for his role as Rooster Cogburn in 1969’s True Grit.

When asked how he wanted to be remembered, he said: “Feo, Fuerte y Formal,” a Spanish proverb meaning “He was ugly, strong and had dignity.”