UPDATE: Turns out the little old man caused the initial accident, but Gary Collins was still under the influence and arrested just the same.

TV personality Gary Collins is the latest celebrity to be busted for driving under the influence.

According to reports, Gary was driving his Ford Explorer when he crashed into a little old man in a Toyota. This caused Gary to lose control and smash into two parked cars. Witnesses at the scene say that Gary was traveling at speeds up to 60 mph and attempted to flee before police arrived.

…the driver of the Toyota was rendered unconscious, and had to be pulled out of the back passenger door by paramedics who arrived on scene, and was transported to the hospital…Cops tried to get Collins to perform a Breathalyzer test — we’re told four times — but Collins claimed he was hard of hearing and unable to understand officers’ instructions. After the fourth time, a witness tells us cops were exasperated with Collins’ cagey behavior and arrested him, placing him in the back of a police cruiser…Celebrity Smack

Mr. Collins was also arrested for DUI in 2002, but was ultimately found not guilty. This is a picture of Gary Collins’ car after the accident. He’s damn lucky to be walking today. MORE PICTURES 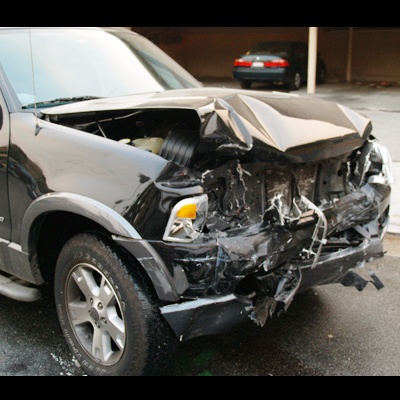