George Clooney and Brad Pitt have shamelessly campaigned for him since 2001, but this year’s winner was Bourne to the title. “You’ve given an aging suburban dad the ego-boost of a lifetime,” Damon, 37, told PEOPLE, explaining why he couldn’t possibly accept the crown – which perfectly demonstrates many of the reasons we chose him in the first place: irresistible sense of humor, rock solid family man, heart-melting humility. PEOPLE Magazine – Sexiest Men Alive 2007

Matt Damon? For real? I mean, he’s good looking but… 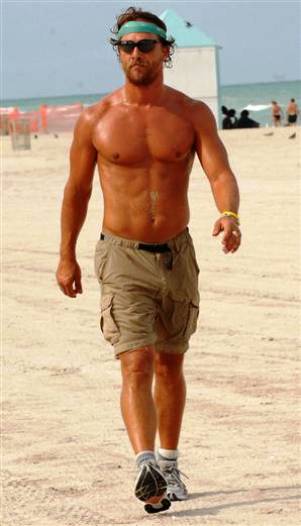 Matt lost so much weight for Courage Under Fire, he nearly died. He was trying to look emaciated for the role because his character was a heroin addict.

Matt perfected his Southern accent for The Rainmaker by working as a bartender in Knoxville, Tennessee for free. He even hired one of the customers to serve as his dialect coach.

Matt was so anxious to become an actor, he dropped out of Harvard just 12 credits short of graduating to head to Los Angeles.

How perfect is this? One Matt does the other…

HA! HA! I tricked you into looking at a picture of Matthew McConaughey! Mmmm…..Matthew…..