Immortalized in the Washington’s Smithsonian Institution as “America’s Legendary Daredevil,” Knievel was best known for a failed 1974 attempt to jump Snake River Canyon on a rocket-powered cycle and a spectacular crash at Caesar’s Palace in Las Vegas. He suffered nearly 40 broken bones before he retired in 1980.

Although he dropped off the pop culture radar in the ’80s, Knievel always had fans and enjoyed a resurgence in popularity in recent years. In later years he still made a good living selling his autographs and endorsing products. Thousands came to Butte, Mont., every year as his legend was celebrated during the “Evel Knievel Days” festival. Evel Knievel Dead at 69 – Outside the Beltway 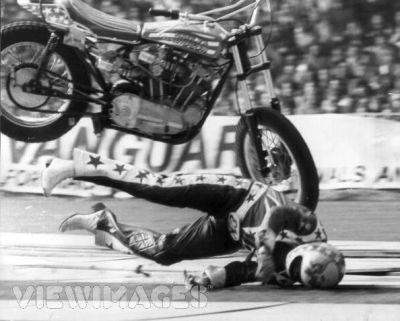 He dropped out of high school as a sophomore and got a job in the copper mines as a diamond drill operator for the Anaconda Mining Company.

He was inducted into the Motorcycle Hall of Fame in 1999.

He was a born-again Christian later in life.

He appears in Austin Powers: International Man Of Mystery where he is frozen along side Vanila Ice and Austin Powers.