They’re baa-ack! Ah the Spice Girls. However did we survive in a world without them?

The spicy 5-some kicked off their reunion tour in Vancouver, British Colombia this past Sunday, performing together for the first time in 10 years and wearing custom Roberto Cavalli outfits of bronze and gold. 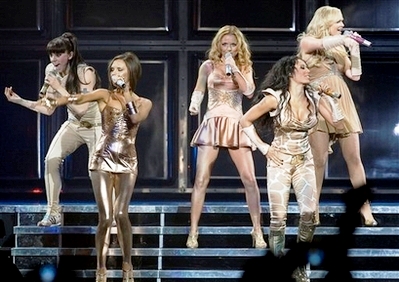 As they prepared for the concert, the Spice Girls said they were excited and nervous about their big night.

“You know what, so much time has passed, so much water has gone under the bridge, it’s just great to all be back together,” said Melanie Chisholm, also known as “Sporty Spice.”

Chisholm dismissed the notion that there was any tension among the women.

Fun facts about the Spice Girls…

More than 5,000 gays and lesbians from the UK voted the members Victoria Beckham place 12 and Geri Halliwell place 43 to the Top 50 gay icons of all time.

They were voted the biggest cultural icons of the 1990s by 80% in a UK poll of 1,000 people carried out for the board game Trivial Pursuit, stating that “Girl Power” defined the decade.

23,000 tickets for their reunion shows in London sold out in 38 seconds.