For those who don’t know, Jamie Lynn Spears is the star of Nickelodeon’s Zoey 101, which just finished filming its fourth season. The prospect of a fifth season is now up in the air, thanks to little Jamie Lynn.

“It was a shock for both of us, so unexpected,” she said. “I was in complete and total shock and so was he.”

Spears is 12 weeks along and initially kept the news to herself when she learned of the pregnancy from an at-home test and subsequent doctor visit, she told the celebrity magazine, which hits stands in New York on Wednesday and the rest of the country by Friday.

What message does she want to send to other teens about premarital sex? “I definitely don’t think it’s something you should do; it’s better to wait,” she told the magazine. “But I can’t be judgmental because it’s a position I put myself in.”

It was a shock? Totally unexpected? What the heck did she think would come of unprotected sex? And now that she’s knocked up she thinks it’s better to wait until marriage for sex? You know, I’m so tired of stupid idiot girls saying stupid idiot things like that. Of course she thinks it’s better to wait now that she has a consequence to pay. But I bet she wasn’t thinking of any of that while doing the monkey dance. Oh, and by the way, can you say “statutory rape?”

Several of my friends have had surprise pregnancies, and every single one of them has looked at the situation as a natural outcome of sex and moved on. Sure it was a shock to them, but not a “complete and total” one.

Jamie Lynn says she’s going to raise the baby in Louisiana so it can have a “normal” upbringing. Uh, would that be “human” normal or “Spears Family” normal? I really hope she isn’t planning on reading her mother’s book on parenting (the publication of which has been “delayed indefinitely”) – or emulating her sister’s parenting skills.

I have no idea if the dude in this picture is the baby’s daddy, but the picture was taken this past summer, so it could very well be. 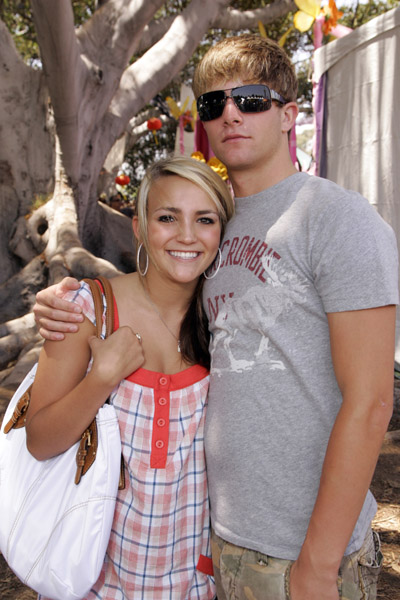