Oh my God, have you heard? Britney Spears was taken to Cedars Sinai Hospital last night after a three hour standoff at her house. And apparently she went totally bonkers in the ambulance and had to be strapped down to the gurney. Check out a video of the chaos at CelebTV.com

Oh my God. The drama that is Britney Spears keeps getting better and better.

At 7:00 last night, Britney Spears was to hand over her two children to the court appointed child monitor. The monitor was able to get Preston, 2, in the car but when she went to get Jayden, 1, Britney has locked herself in a room with the baby.

At around 8:00, says Officer Jason Lee, the police responded to a call “about a custodial dispute regarding Britney Spears’s children.” Officer Lee states that after nearly three hours, the police confirmed that according to the custody court order, the children were indeed supposed to be with Kevin Federline, and a transfer of the children was then arranged. Officer Lee added, “While officers were on the scene, they observed Ms. Spears under the influence of an unknown substance.”

A source tells PEOPLE it was the pop star’s court-appointed child monitor who called police. “She had already put Preston in the car when Britney locked herself in a room with Jayden,” says the source. “The cops came and got through the door and tied her down to a gurney.”

Britney is now on lockdown for a mandatory 72-hour mental evaluation called “5150 Hold.” This type of evaluation occurs “when any person, as a result of mental disorder, is a danger to others, or to himself or herself, or gravely disabled.”

Man, I bet Kevin Federline is wishing he had never left Shar Jackson for Britney right about now. 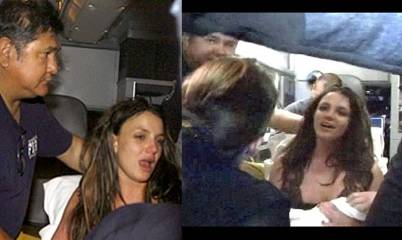