UPDATE: The rolled up $20 found next to Heath’s bed DID NOT have any drug residue on it, and no illegal drugs were found in the apartment. There were, however, 6 different drugs prescribed to Heath.

The preliminary results of Heath Ledger’s autopsy are in and the cause of death is inconclusive.

Ellen Borakove, a spokeswoman for the medical examiner’s office, told MTV News that more tests were needed to determine the official cause of Ledger’s death.

It will take around 10 days for the medical examiner’s office to conduct additional tests and complete their investigation into the nature of Ledger’s untimely death, Borakove said. Police involved in the investigation have speculated that the actor’s death was the result of an accidental drug overdose. Heath Ledger Autopsy Yields Inconclusive Results – VH1.com

It has been confirmed that Heath had pneumonia at the time of his passing, but it was not the cause of death.

…Michael Baden, a prominent forensic pathologist not involved with the investigation, tells PEOPLE that if the pneumonia had been the cause of the actor’s death, that would have been evident in Wednesday’s initial results, given that it is “readily identifiable at the time of autopsy, because the lungs, instead of being filled with air, are filled with fluid, and we die from pneumonia because we can’t breathe.”

As for the meaning of “inconclusive,” Baden said, “My interpretation means they didn’t find a proper cause of death. That kind of rules out the natural causes, such as a brain hemorrhage, pneumonia or a cardiac abnormality that is common in that age group. That leaves drug overdose as the most likely cause of death.” Initial Ledger Autopsy Proves Inconclusive – People.com

I am still in shock over Heath’s death. I wasn’t really surprised when Anna Nicole Smith died; and I’m not surprised that there is an obit ready to go for Britney Spears. But this one blew me away. 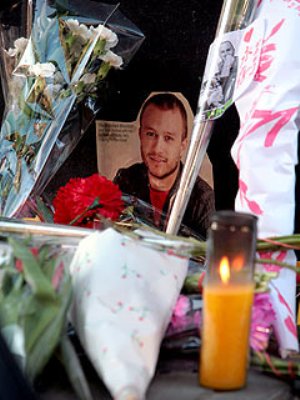 This just in from TMZ.com…

TMZ has confirmed with NYPD sources in the Heath Ledger investigation that cops found a $20 bill rolled up “in a certain way” with a powdered substance on it. Our sources say they don’t know what the nature of the powder is, but it’s being tested at the police lab.

CBS 2 in NYC is reporting cops found drug packets along with the $20 bill in Ledger’s apartment.

Our sources say the manner in which the bill was rolled made them “suspicious.”

Visit Anything Hollywood for a video tribute to Heath Ledger.