Redmond O’Neal, the 23-year-old son of Farrah Fawcett and Ryan O’Neal was arrested last month on charges of driving under the influence and drug possession. It was his second time being arrested for drugs – back in 2005 he pleaded guilty to possession of meth and coke. According to various sources, Redmond has been in and out of rehab at least a dozen times.

Now, in this day and age of young people in Hollywood being arrested for DUI and/or drugs, Redmond’s arrest may not seem all that out of the ordinary. (My lord, how sad is that?) But, the story doesn’t really start with this recent bust.

About a year ago, Ryan O’Neal was accused of physically attacking his other son Griffin with a fireplace poker when he came home and found Redmond chained to the staircase and Griffin laughing about it. According to Griffin, he found a passed out Redmond and feared that his brother had overdosed because he was unresponsive, so he tied Redmond to the banister so he couldn’t leave the house to get more drugs.

Am I the only one who thinks that Griffin’s reasoning is a little skewed? He finds his brother unresponsive, and instead of reviving him, he chains him to the stairs? What?? Of course, his father is Ryan O’Neal, and he isn’t exactly a mentally balanced man himself (just ask Tatum).

Law enforcement sources say when Ryan O’Neal returned from dinner last Friday night, he found his son Redmond (whose mother is Farrah Fawcett) tethered to a staircase with handcuffs on his ankles. We’re told Griffin had chained his brother to the banister earlier in the evening, after walking in on him and finding that he was unresponsive. We’re told Griffin believed his brother had overdosed and tethered him to prevent him from leaving and buying drugs.

We’re told Griffin was so concerned, he called 911 and paramedics actually came to the house. Redmond was awake and said he had just been sleeping, so the paramedics left.

We’re told when Ryan arrived home at 11, he tripped over the chain tied to Redmond and became enraged as Griffin laughed it off.

Law enforcement sources tell TMZ, they believe it was Ryan — not Griffin — who initially began swinging the fireplace poker. And these sources believe it was Ryan who struck Griffin’s girlfriend before Griffin wrestled the poker away from his dad. Ryan’s people strongly dispute this and claim Griffin was drunk and was the one who grabbed the poker first.

We’re told Ryan screamed “Get the f**k out of my house you asshole.” Griffin and his girlfriend walked out, and we’re told, for some reason, came back. It was then that Ryan fired a shot.

When deputies arrived, they found Redmond still tethered and shot video to document it. They also shot video of Ryan’s injuries. 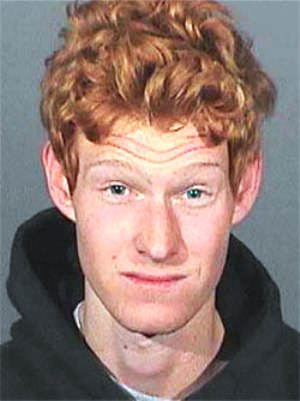