Well, it wasn’t exactly outer space, but it might as well have been. I was in Mississippi. Enough said.

I’m not quite back to my fighting weight, but I did want to check in and let you know that I’m still alive. I’ll be sure to do a Gossip Round Up this evening so we can all catch up on what I missed.

In the meantime, let’s choke on this…..

“Defying our expectations,” Heidi Montag “has emerged as a kind of feminist hero” in the new Hills season (airing tonight), a New York Times critic writes.

“Her groundswell of self-assertion begins when [beau Spencer Pratt] insists on eloping, prompting Heidi to declare, ‘This isn’t, like, Spencer’s relationship and you decide what we do,'” critic Ginia Bellafante says.

“The full-on joyous Oprah-fication of Heidi culminates with the show’s return and gives The Hills a new momentum,” she writes. “After taking a break from Spencer at her parents’ modest house in Crested Butte, Colorado, Heidi returns to Los Angeles to kick him out and chastises him for taking her flat-screen TV with him.” (The happy pair celebrated Easter Sunday together.)

Meanwhile, Lauren Conrad, who spends her screen time “pining for [Brody Jenner], who, she has confessed, never makes her feel good enough… could learn from Heidi right now,” Bellafante writes.

If that wasn’t enough to make you lose your breakfast, check out the puke-worthy Heidi Montag and Spencer Pratt this Easter weekend….. 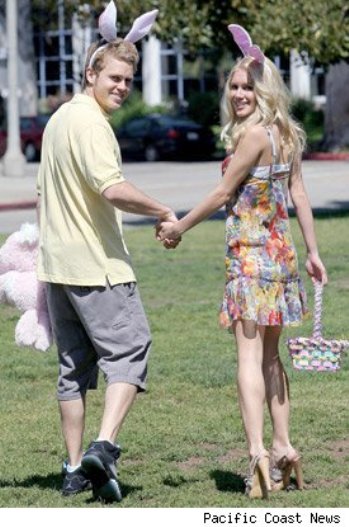