Home
Hollywood Gossip
Vanilla Ice Is In The Slammer. Again.

All right stop, collaborate and listen Ice is back with my brand new invention …

Actually, being arrested for domestic violence is an invention that’s been around for quite a long time.

Ice was booked by Palm Beach County Sheriff’s deputies at 10:43 PM ET on a charge of domestic battery…he got into an argument with his wife, Laura, and he pushed her.

In January 2001, Van Winkle was arrested by police in Davie, Florida for assaulting his wife. According to the criminal complaint, they got into an argument as they drove on Interstate 595, with Van Winkle allegedly pulling hair from her head. He pleaded guilty to charges of disorderly conduct four months later, and was sentenced to probation and ordered to attend family therapy sessions. Wikipedia

I’m going to take a wild guess here, and say that all those anger management classes Vanilla Ice was ordered to take didn’t do him a lick of good. 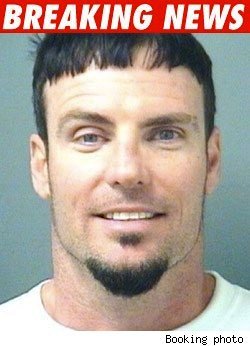