Mmmm…..George Clooney is yummy, and gets more and more scrumptious each year. This year he’s 47, and doesn’t look a day over delicious.

After the Metropolitan Costume Institute Gala last night, the dapper George and friends headed to Bungalow 8 for a little late night birthday celebration.

…Fergie serenaded him with, “You make me feel so young,” while Katie Holmes and Tom Cruise stood by his side as he blew out the candles on his cake. I’m Not Obsessed

In attendance also, of course, was George’s much younger and equally beautiful girlfriend Sarah Larson. They’ve been together for more than a year so the marriage rumors are swirling, but seeing how George Clooney is dead set against getting married again, I don’t see nuptials happening anytime soon.

Clooney has been married once, to actress Talia Balsam from 1989 to 1993. He says he will never get married again nor have any children, but Michelle Pfeiffer and Nicole Kidman each bet him $10,000 that he would be a father before he turned 40. They were both wrong, and each sent him a check. He returned the money, betting double or nothing that he won’t have kids by age 50. Allie Is Wired

More about the Gala and George’s birthday party HERE

A portrait of George made out of 10,000 jelly beans was donated to a charity of George’s choice in 2008.

[He] auditioned for the role of ‘Mr. Blonde’ in Quentin Tarantino’s hit thriller Reservoir Dogs, but was turned down.

George slept in a friend’s closet for a year while waiting for his big break into the acting world. 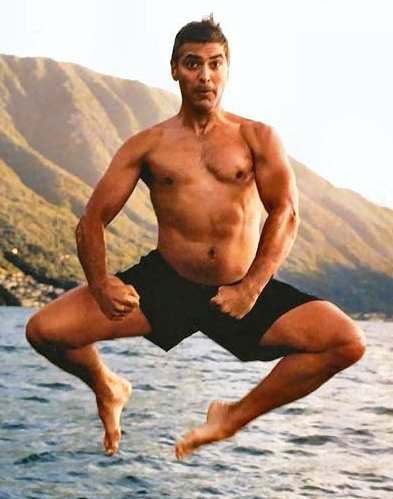