Eighth Place
In Detroit, a 41-year-old man got stuck and drowned in two feet of water after squeezing head first through an 18-inch-wide sewer grate to retrieve his car keys.

Seventh Place
A 49-year-old San Francisco stockbroker, who ‘totally zoned when he ran,’ accidentally, jogged off a 100-foot high cliff on his daily run.

Sixth Place
While at the beach, Daniel Jones, 21, dug an 8 foot hole for protection from the wind and had been sitting in a beach chair at the bottom when it collapsed, burying him beneath 5 feet of sand. People on the beach used their hands and shovels trying to get him out but could not reach him. It took rescue workers using heavy equipment almost an hour to free him. Jones was pronounced dead at a hospital.

Fifth Place
Santiago Alvarado, 24, was killed as he fell through the ceiling of a bicycle shop he was burglarizing. Death was caused when the long flashlight he had placed in his mouth to keep his hands free rammed into the base of his skull as he hit the floor.

Fourth Place
Sylvester Briddell, Jr., 26, was killed as he won a bet with friends who said he would not put a revolver loaded with four bullets into his mouth and pull the trigger.

Third Place
After stepping around a marked police patrol car parked at the front door, a man walked into H&J Leather & Firearms intent on robbing the store. The shop was full of customers and a uniformed officer was standing at the counter. Upon seeing the officer, the would-be robber announced a hold-up, and fired a few wild shots from a target pistol. The officer and a clerk promptly returned fire, and several customers also drew their guns and fired. The robber was pronounced dead at the scene by Paramedics. Crime scene investigators located 47 expended cartridge cases in the shop. The subsequent autopsy revealed 23 gunshot wounds. Ballistics identified rounds from 7 different weapons. No one else was hurt.

HONORABLE MENTION
Paul Stiller, 47, and his wife Bonnie were bored just driving around at 2 A.M. so they lit a quarter stick of dynamite to toss out the window to see what would happen. Apparently they failed to notice the window was closed.

RUNNER UP
Kerry Bingham had been drinking with several friends when one of them said they knew a person who had bungee-jumped from a local bridge in the middle of traffic. The conversation grew more heated and at least 10 men trooped along the walkway of the bridge at 4:30 AM. Upon arrival at the midpoint of the bridge they discovered that no one had brought a bungee rope.

Bingham, who had continued drinking, volunteered and pointed out that a coil of lineman’s cable, lay near by. They secured one end around Bingham’s leg and then tied the other to the bridge. His fall lasted 40 feet before the cable tightened and tore his foot off at the ankle. He miraculously survived his fall into the icy water and was rescued by two nearby fishermen. Bingham’s foot was never located.

AND THE WINNER IS…
Zookeeper Friedrich Riesfeldt (Paderborn, Germany) fed his constipated elephant 22 doses of animal laxative and more than a bushel of berries, figs and prunes before the plugged-up pachyderm finally got relief.

Investigators say ill-fated Friedrich, 46, was attempting to give the ailing elephant an olive oil enema when the relieved beast unloaded. The sheer force of the elephant’s unexpected defecation knocked Mr. Riesfeldt to the ground where he struck his head on a rock as the elephant continued to evacuate 200 pounds of dung on top of him.

It seems to be just one of those freak accidents that proves.. ‘Shit happens’. 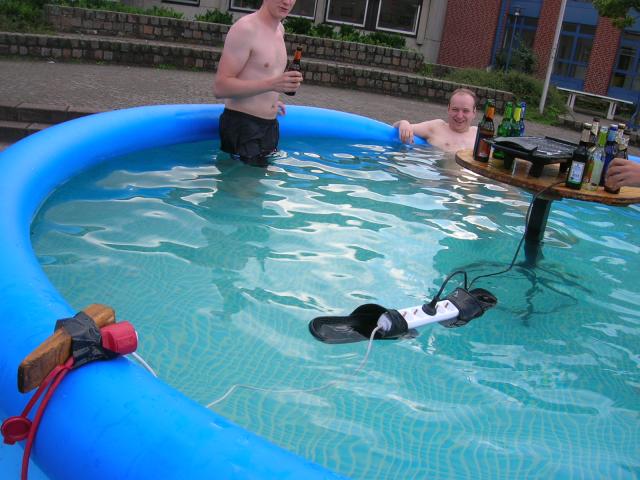