Apparently, Jack Black can’t keep a secret. Of course, it wasn’t really a secret since we’ve basically known all along. In case you’ve been under a rock and haven’t heard, Angelina Jolie is pregnant with twins. It is now official. Brad Pitt’s done knocked her up again, if you don’t believe the rumors of in vitro*, that is.

Not only did fellow co-star Jack Black confirm that Angelina Jolie and Brad Pitt are expecting twins, but another co-star, Dustin Hoffman, shared the due date of August 19th… Celebrity Baby Blog

So that will be six kids in the Jolie-Pitt clan; three adopted and three squeezed out. Does that mean the next kid will be adopted? I am genuinely interested in seeing how many children Angelina Jolie and Brad Pitt end up with. And I really really hope their dream world doesn’t end the same way Mia Farrow and Woody Allen’s did. 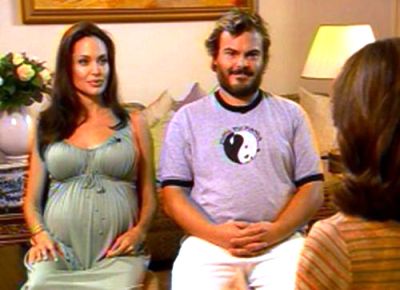 *in vitro [(in vee-troh)]
In the laboratory; literally, “in glass” (laboratory experiments are often carried out in glass containers). In vitro conditions are distinguished from conditions that actually apply in nature. (Compare in vivo.)
Note: In vitro appears in the expression in vitro fertilization, a way of producing human embryos in a laboratory.