Home
Hollywood Gossip
Jessica Alba And Cash Warren Get Hitched On The Sly.

There must be something in the Hollywood air that is making pregnant celebrities marry their baby’s daddy. Last Saturday it was Ashlee Simpson and Pete Wentz. Today it is Jessica Alba and Cash Warren, who are due to have a baby girl this summer. I would ask if Angelina Jolie and Brad Pitt are next, but that would just be an example of a stupid question.

As with Ashlee and Pete’s wedding, Jessica Alba and Cash Warren opted for a small ceremony. A very small ceremony – it was just the two of them.

According to a source, they were married in the Beverly Hills courthouse’s ceremony room under an arch of green silk foliage and white flowers. They were casually dressed, with Alba wearing a long blue dress and her hair back in a ponytail.

“She looked happy but nervous,” the source says.

Warren, in a white shirt and brown pants, arrived with Alba at about 11:30 a.m. on Monday, applied for a marriage license and waited about 40 minutes for the paperwork to be processed before a staff member from the courthouse married them, the source says.

Nobody else attended the wedding, the source adds.

Update on Ashlee Simpson and Pete Wentz: They have a pre-nup and they’re spending their honeymoon in their basement with inflatable palm trees and a tanning bed. And of course, the fetus growing in Ashlee’s uterus still has yet to be confirmed by either DNA contributor. 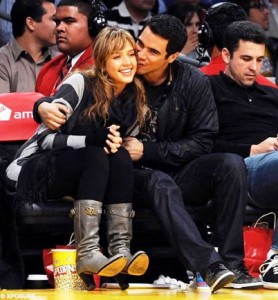