As if making a zillion dollars a year wasn’t enough, Kanye West launched his own travel site, “Kanye Travel Ventures,” at the beginning of April. It’s being toted as a place where Kanye’s fans can buy concert tickets, plan their trips to his concerts, and purchase Kanye West merchandise all in one place.

Basically, it’s like all the other travel sites but with a Max Headroom looking picture of the rap star.

KanyeWest.com is of course just the latest wacky web venture for the Chicago rapper, who previously gave the internets his very own search engine, SearchWithKanyeWest.com…

Nevermind that this thing basically looks like a Travelocity/Orbitz/Cheapflights.com search engine with a Kanye banner tossed across the top, or that most normal people don’t have any “Kanye travel needs” that involve airplanes, hotels, car rentals, and cruises.

I suppose if you’re a hard core Kanye fan and want to follow him everywhere, his site is the place to be. And, I suppose if your Kanye West a travel website is the best way to get as much money as possible out of your loyal fans.

Kanye is said to have brought in travel consultants to design programs to create and manage a cost effective travel experience for his loyal fans. KTV “has been designed with Kanye and his executive team, and his energy and resources have been devoted to this innovative product offering,” travel consultant Neil Abrams said in a statement. AceShowBiz 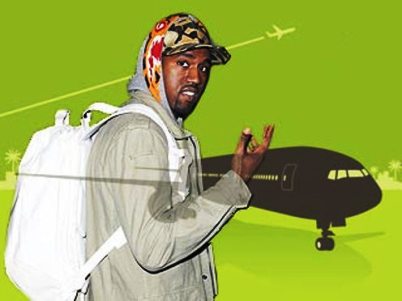