He also says he still loves his soon-to-be ex-wife Linda, “I unconditionally love my wife, even though we’re not together anymore…The Linda that I know was a great mother and a great person.”

Was?? Very interesting; so many things to be read between those lines.

As for VH1, Hulk Hogan thinks, “letting cameras into their home for their hit VH1 show, Hogan Knows Best, may have been a mistake: ‘I just think the reality show amplified the problems that were already there.’”

Gee, you think? Did Newlyweds and Meet the Barkers teach you nothing?

And those rumors about Hogan dating one of his daughter Brooke’s friends?

Hogan says his relationship with Brooke, 20, “was strained for a while” after Brooke learned that Hogan had a brief fling with one of her close friends, a woman in her 30s. “Brooke has gone through a range of emotions,” Hogan says. “She was a little confused about who everybody was, and maybe had misinformation, but right now Brooke understands who I am, and who her mom is, and what’s real and not real. She’s doing real well now.”

I’m sorry, but I’m starting to view the Hogans like I do the Spears family – just another white trash family with money. Dad is dating the daughter’s friend, Mom is dating a man her daughter’s age, and brother is in jail for almost killing his buddy. Now all they need is a trailer with some plastic flamingos out front on the Astroturf. 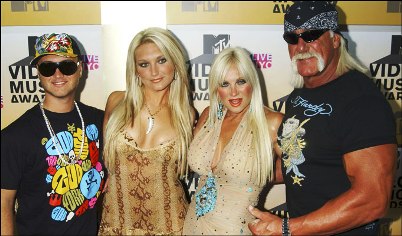