And she needs an intervention; preferably on A&E.

I had a great night last night with Kathy Griffin, three friends, and hundreds of strangers. We were in Concord, CA enjoying a beautiful night – and laughing our asses off (besides Kathy’s repeated mispronunciation of Concord).

Let me start by saying that Kathy Griffin is friggin’ hilarious. She’s also quite crude and makes absolutely no apologizes for it; my kind of girl, indeed.

Attacking everyone from Lindsay Lohan to Miley Cyrus, Celine Dion to Barbara Walters and even poking fun at herself, Kathy swings a sword of quick wit, dipped in deep rooted D-List bitterness. But through it all I could see that Kathy was being genuine and truly herself – not some character the world wants her to be. Somehow, knowing that the cruel jokes came from a place of true heart and love for making people laugh, they didn’t seem cruel at all and were just downright funny.

But then again, I have a pretty warped sense of humor, so maybe the jokes are mean. Oh well, they make me laugh, and that’s all that really matters.

Oh, and that cutting bit. Don’t worry, she won’t get mad. She told me to tell you.

Kathy Griffin: My Life On The D-List

At the 2007 Emmy awards, Kathy made an offensive remark about Jesus which was cut from the pre-taped telecast. While accepting the award for ‘Best Reality Program’ for her show My Life on the D-List, Kathy made the comment, “A lot of people come up here and thank Jesus for this award. I want you to know that no one had less to do with this award than Jesus. Suck it, Jesus. This award is my god now.”

On June 17, 2008, Kathy Griffin released a comedy album titled For Your Consideration created exclusively for the purpose of gaining a Grammy nomination. 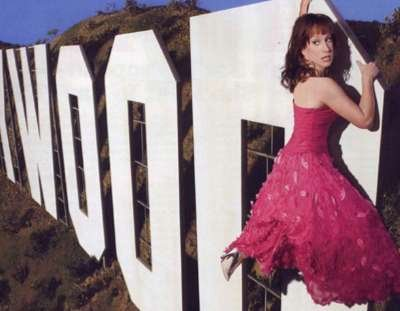