Home
Hollywood Gossip
LeRoi Moore Is Dead, Ellen Got Married, And Ricky Martin Is The Father Of Twins

We all knew another one had to go; after all, celebrity deaths come in three’s. Except this time around, apparently; this time there are four, and they all happen to be black men. How weird.

First it was Bernie Mac, then Isaac Hayes, and now saxophonist LeRoi Moore of the Dave Matthew’s Band and actor Julius Carry, better known as “Sho Nuff” from The Last Dragon.

It is being reported that LeRoi Moore, 46, died yesterday from complications stemming from an ATV accident back in June.

There is no official report on Julius Carry’s death, but it is being said that he died of pancreatic cancer yesterday. He was 56.

With all this death, I think things need to be balanced out a bit…

Marriages
As of this past Saturday (Aug. 16th), Ellen DeGeneres and Portia DeRossi are legally married; in California, anyway. Both women are overjoyed and Ellen shared her thrill on her blog.

“I had a big, big weekend. I got married to Portia de Rossi! Sorry, John Stamos… this one’s taken.

You may notice something different about the way I’m writing…it’s fancy. This is the font I type in now that I’m MARRIED! I do a lot of things differently now …I say ‘I do’ a lot. For example: Who wants to do pilates? I do. Would you like a Mountain Dew? I do. Do you know why I pulled you over? I do. And that was just this morning.

The wedding was everything we hoped it would be. I wish I could’ve invited all of you. But I have some pictures and video I can show you when Season 6 starts on September 8th. I can’t wait to see them too…it was all a blur. See you then.”

Births
Ricky Martin has twin boys now, thanks to a surrogate. But Matt Damon and Luciana did it the old fashion way and have welcomed Gia Zavala into their family.

Breakups
Donnie Wahlberg and Kim Fey are getting divorced. But Chris Kattan and Sunshine Tutt have only separated, with no immediate plans to divorce. 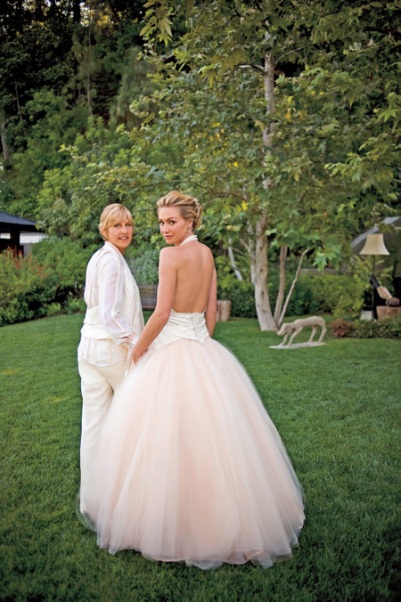