What I am surprised about, however, is that Da Brat and Mariah Carey are best friends. Did you know that? I sure didn’t. Seems like an odd pairing, doesn’t it. But Da Brat was one of the select few people to attend the impulsive wedding of Mariah Carey and Nick Cannon, so I guess they’re tight.

Last fall, Da Brat (born Shawntae Harris) was attending a Halloween party in Atlanta, GA when she got in a fight with Shayla Stevens, who was an Atlanta Falcons cheerleader and the time and working as a hostess that night. During the altercation, Da Brat grabbed a practically full bottle of rum and hit Shayla with it; she now has a permanent scar on her face.

After pleading guilty, Da Brat was sentenced to three years in prison, seven years probation, 200 hours of community service, as well as completion of a substance abuse program, anger management, and a mental evaluation.

As the deputy led Da Brat out the courtroom after sentencing on Friday, she told her family, “I love y’all.” The group broke down into tears and assured the new prisoner, “We love you too.”

Oh, by the way, Da Brat was arrested back in 2000 after she hit a woman at a bar; she was sentenced probation for one year. 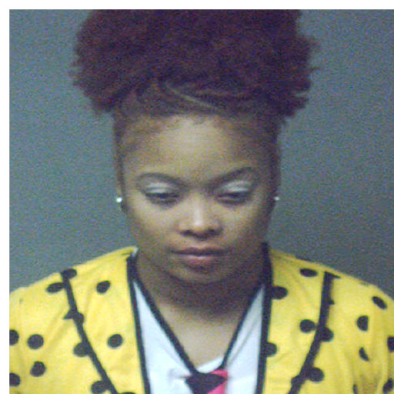 P.S. What the HELL is she wearing??