We’ve known for a long time that Suge Knight is a big scary man and all around thug, but now we can add woman beater to his resume. Oh, joy!

…about 6:40 a.m. after officers arrived at the scene of a minor traffic accident and found Knight hitting a woman in a parking lot off a busy thoroughfare.

“A citizen sees the beating in a parking lot, police get there fast, they see him beating her. It’s a good solid case,” said Las Vegas police Lt. Chris Carroll…

“This is a very large man,” Carroll said, estimating his weight at more than twice the woman’s. “He was on top of her, actually in the act of violently beating her when the officers arrived, with the knife in his hand.”

We’ve also known for a long time (well I have, anyway) that actress Mackenzie Phillips has some issues with drugs. Sadly, it looks like those issues have become serious once again.

Mackenzie Phillips has been busted at LAX for allegedly possessing heroin and cocaine… At 10:00 AM, officers responded to Terminal 4, where 48-year-old Phillips was being screened by TSA. During the screening process, some baggies and balloons believed to contain heroin and cocaine were recovered.

At press time, Mackenzie was still in police custody.

Kelly Osbourne was out and about yesterday sporting a lovely black eye and temple bandaging.

Kelly has a mouth on her sometimes, maybe she pissed somebody off. Someone like her BFF Amy Winehouse ? Now wouldn’t that be funny. We know how @@@@@y Amy can get after not sleeping for three days..

Kelly is claiming that she smacked her face on a cupboard, by the way (scroll down for photo).

Sometimes one hears things they could have gone their whole lives without hearing and have been just fine. This is one of those things.

Matthew McConaughey’s mother has written a book entitled I Amaze Myself and in it describes how Matthew’s father (whom she married three times; take that Liz and Dick!) met his demise – in the buff and mid-coitus.

“On Monday mornings, he and I often said goodbye by making love. But one day, all of a sudden, it just happened. I knew that something was wrong, because I didn’t hear anything from him. Just nothing. But it was just the best way to go!”

“I was just so proud to show off my big old Jim McConaughey — and his gift,” she says.

Pop On The Pop

Airing such family laundry may not be all that appropriate, but it’s a great story! And some how makes me love my Matthew even more. 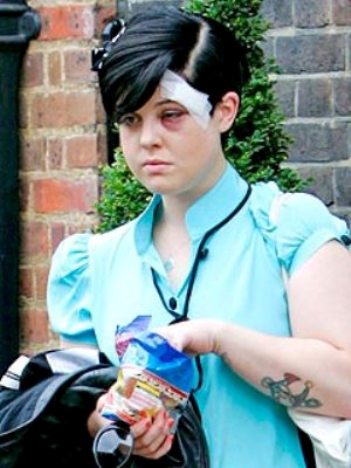