Back in January I told you about Sean Penn and James Franco making a movie in San Francisco about assassinated city council man Harvey Milk.

Well the trailer has hit the internet, and I must say that I think it’s going to be a great movie. Not only because a couple people I know are extras, but also because it’s a story that needs to be told. Harvey Milk was a pioneer and a hero.

The film stars Sean Penn as Harvey Milk, James Franco as Milk’s boyfriend at the time of the murder, and Josh Brolin as Dan White, the man who shot Harvey Milk. 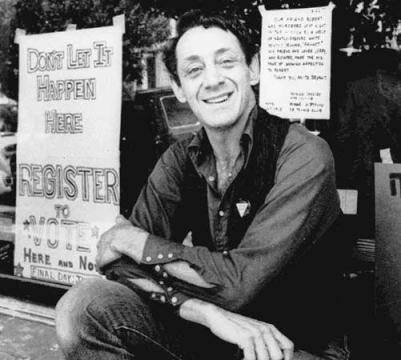 After moving to San Francisco, the middle-aged New Yorker, Harvey Milk, became a Gay Rights activist and city politician. On his third attempt, he was elected to San Francisco’s Board of Supervisors in 1977, making him the first openly gay man to be elected to public office in the USA. The following year, both he and the city’s mayor, George Moscone, were shot to death by former city supervisor, Dan White, who blamed his former colleagues for denying White’s attempt to rescind his resignation from the board.

Mr. Milk had been the subject of several books and the Academy Award-winning documentary feature, The Times of Harvey Milk (1984); but Milk (2008) is the first fictional feature to explore private aspects of the man’s personal life and career.

Milk was filmed on location in San Francisco. Many of Mr Milk’s real-life surviving friends and former associates participated in the making of this film, several appearing on camera.