And there are a zillion reasons why…..

Madonna and Ritchie “can’t bear to live with the pretense any longer,” sources for The Sun and The New York Post whisper.

“The final straw came before Madonna started her US tour.”

“It’s very sad. They were a great couple and brilliant parents. They just couldn’t live together.”

“Despite huge attempts to patch things up, they both knew deep down that divorce was in the cards. It wasn’t a matter of ‘if’ but ‘when.’ They tried hard over the past few months, but their fighting was getting out of control,” the insider adds.

“They have both been fighting and the marriage has been on the rocks for weeks,” a spywitness told the Daily Mail Tuesday.

“Guy has been the one who has come to the conclusion that enough is enough. They had planned to make it work in the New Year after the end of Madonna’s world tour but it quickly became clear that the relationship was not worth saving.”

“Guy has been saying that they both have separate lives at the moment,” the source added.

“Madonna spends too much time in the gym and she is obsessed with trying to look years younger than her real age. Guy feels that Madonna does not focus on him any more.”
popcrunch

“Madonna wanted a highly stage-managed separation, with their split being announced when it was convenient for her.

“She didn’t want the distraction while she is trying to concentrate on her tour.

“But a series of rows around Guy’s 40th birthday last month were so bad that Madge ended up storming out of the house and Guy’s had enough.

“Guy said if they were going to split, it has to be now — and their marriage will finally be over in a matter of weeks.

“Madonna was dithering at first about whether a separation would be best or whether to go ahead with the divorce.

“She has now agreed with Guy that a divorce is the best thing to do.”
Seriously? OMG! WTF?

A source told MailOnline: ‘Gwyneth begged Madonna all summer not to be an idiot and let this marriage fall apart. But Madonna can be very hard-headed and treats Gwyneth like a younger sister. If Madonna goes through with a divorce it’s going to break Gwyneth’s heart and affect their friendship permanently.’
Hollywood Backwash

Madonna cryptically announced at her Oct. 6 concert in NYC, “In exactly 29 moves, the Queen will trump the King!”

Coincidentally — or not — she had 29 more dates on her U.S. tour, according to Star.
Just Jared

My take on the whole thing? So glad you asked.

I think Madonna is an incredible artist and talent (maybe not so much in the vocal department, but the @@@@@ can dance!). I also think she’s a massive media whore and knows exactly what to do to stay relevant in today’s world of celebrity. That being said, I believe Madonna is a very selfish and controlling woman and when she makes up her mind about something, that’s it – end of story, she’s done.

As for her marriage to Guy Ritchie, I’m sure they’ve had problems from the beginning (for all the reasons stated above and more), but the adoption of baby David was the straw that broke the British camel’s back. Personally, I think Madonna told Guy they were adopting a child and didn’t give him any choice or voice in the matter.

I’m not at all surprised that Mr. and Mrs. Ritchie are getting divorced, but I am surprised that Madonna allowed the news to hit the airwaves before the end of her tour. Looks like Guy may have won one after all.

P.S. I’m going to see Madonna in Oakland, CA on November 1st so don’t you dare say I don’t like her or something stupid like that. If I didn’t like Madonna would I have a mint condition backstage pass from her Like A Virgin tour? I think not!! Speaking of which, does anyone know how much something like that would be worth? If it’s worth anything at all, that is.

…question whether or not David or Tea thought that curing the sexual addiction problem would also fix many of the problems that they had in their marriage. If they did think that, it seems that either the therapy didn’t take or the problems were just too great to overcome by spending a little bit of time with a shrink as they have now officially announced that they are in fact, getting divorced.
Hollywood Heartbreaker

Prediction: Sarah Jessica Parker and Matthew Broderick are next 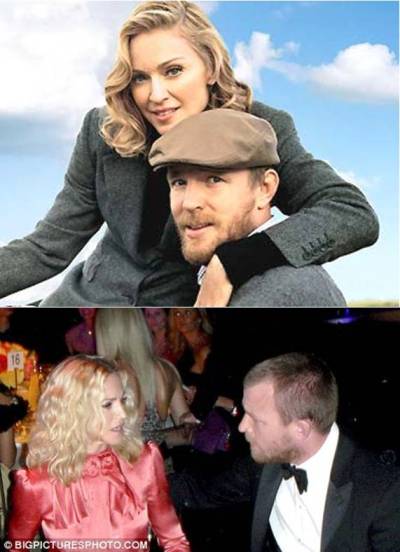 Image Sources:
Judiciary Report
The other side of the river