Travis Barker and DJ AM
DJ AM is back performing and Travis Barker was released from the hospital today. But not before posting some pictures on his MySpace page.

Andy Dick
In a Murrieta, CA courtroom today, Andy Dick pleaded guilty to misdemeanor charges of marijuana possession and battery. He will have to wear an alcohol-monitoring anklet for a year.

Gary Coleman
Gary Coleman, on the other hand, pleaded not guilty to charges of disorderly conduct and reckless driving.

Ryan and Redmond O’Neal
On Wednesday Ryan O’Neal and his son Redmond were charged with felony possession of methamphetamine. Redmond is in rehab and Ryan is still claiming he’s innocent.

Madonna
Sources close to Madonna and Guy Ritchie are saying the couple started having marital problems back in 2005 when Madonna fell off that horse. Madonna thought it was Guy’s husbandly duty to take care of her, but Guy saw things a bit differently.

… Guy approached the whole thing in what she now calls, ‘A very British way’. Instead of smothering her with sympathy he said, ‘Come on darling, you’re a tough bird. You’ll be back on the horse in no time’. Guy’s approach was that a few broken bones is no big deal – and that there was no point in making a drama out of a crisis. But in Madonna’s mind, she could have been killed, and she wanted the full works and to be lavished with love and attention. [CelebSlam] 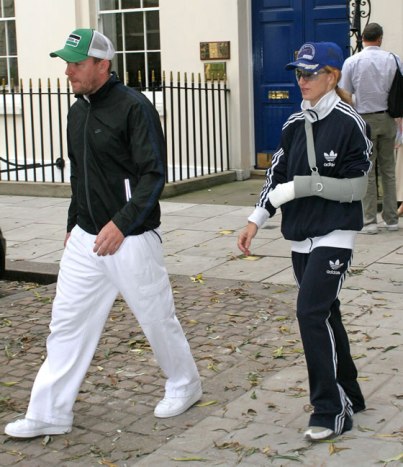