Home
Hollywood Gossip
Mommy, Why Does The Hotel Tropicana Pool Smell Like Death?

Ok, this is just gross. Sure, a death is involved and therefore tragic, but above all, it’s just nasty. Someone dies in their pool, and Hollywood Hotel Roosevelt basically does nothing. Happy swimming!

At 4:30 a.m. Monday Oct. 13, Jordan Nagler, 30, was found dead in the hotel’s Tropicana Bar pool. Days after Nagler’s body was found, “The hotel management had a meeting, where they told staffers the pool didn’t need to be drained” because “there was enough chlorine in it to kill the bacteria.” The entire staff was then told to keep the incident quiet, they didn’t want it getting out. Bricks and Stones Gossip

They didn’t drain the pool! That’s beyond disgusting!

Last week there was a death surrounding the property of the Hollywood Roosevelt Hotel. Out of respect for the family, Thompson has not released the name of the deceased nor any private details.

Unfortunately this morning inaccurate reports regarding the incident occurred. The death in fact was not pronounced at the Hollywood Roosevelt, it was pronounced away from the hotel, only after the individual was taken away by emergency medical staff in an ambulance.

We can assure guests who have used the pool since the incident that proper procedures were taken, and the pool was drained and cleaned once authorities completed their on-site investigation.

Thompson Hotels hope that journalists will respect the family during this time of loss and suffering, and share our deepest sympathies.

I wonder if since they didn’t drain the pool Jordan’s soul hasn’t been able to leave and now he’s going to haunt the hotel. He wouldn’t be the first…

The Roosevelt Hotel is a historic Spanish-style hotel located at 7000 Hollywood Boulevard in Hollywood, California. Named after Theodore Roosevelt and financed by a group including Douglas Fairbanks, Mary Pickford and Louis B. Mayer, it first opened its doors on May 15, 1927…

Marilyn Monroe was a resident at the Hollywood Roosevelt for two years when her modeling career took off. Her first magazine shoot was taken on the diving board on the pool which was recently removed. Monroe stayed in suite 229 which overlooked the pool side. A mirror which once hung in her room is now in the lobby and is thought to be haunted by her spirit. A number of people also claim to have seen her ghost dancing in the ballroom of the hotel.

Montgomery Clift, who lived at the Roosevelt for three months at one time, is said to haunt his old room, 928. People claim to hear him playing his bugle and see him walking the hallways of the 9th floor. 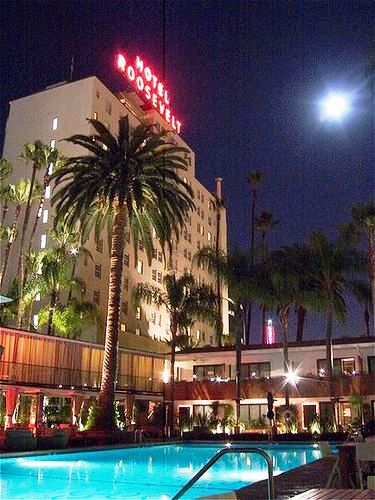