Rumor has it Jennifer Aniston is carrying John Mayer’s baby. I’ve kinda sat on this story to see where it would go. So often celebrity pregnancy rumors are started and go no where, but sometimes the rumors are true so I decided to wait this one out a bit.

Honestly, I can’t really tell where this one will end up. I hope it’s just another celebrity pregnancy rumor and eventually dies down. But I also have a sickening feeling that Jennifer Aniston is indeed preggers. After all, her rep did make a big pronouncement that there’s no truth to the rumor, and isn’t that the tell-tale sign that it’s true?

And if it is true, that is truly sad. I really thought Jennifer had more sense than that; of course, she is dating monkey slut man John Mayer so maybe she doesn’t.

In Touch claims on its cover that Aniston, 39, “looks pregnant” and speculates that’s the reason she reconciled with Mayer, 31.

“It’s not true,” a source close to Mayer told Usmagazine.com.

But Aniston’s rep told Entertainment Tonight then: “Give me a break. She is NOT pregnant.” 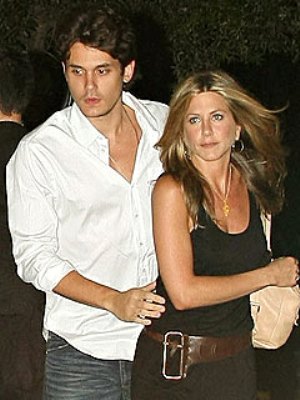