Beyonce thinks she should be wonder woman.

“A black Wonder Woman would be a powerful thing. It’s time for that, right?” Knowles says in an interview with the LA Times.

And what does Beyonce think qualifies her to be the awesome Wonder Woman? She filmed a fight scene with Ali Larter in some movie called Obsessed.

I’m sorry, maybe it’s just me, but when I think of Beyonce Knowles the actress, I think of Foxy Cleopatra from the third Austin Powers movie, and that doesn’t really scream superhero to me; although I can totally picture Beyonce spinning around and around and around.

Actually, you know, now that I think about it, she would fill out the costume nicely – except for maybe the tiny waist part.

For her role as Etta James in the upcoming drama Cadillac Records, Knowles had to pack on 20 pounds. Though the actress is in fighting shape now, she acknowledges the red, white and blue bathing suit is an “unforgiving” one…”I would definitely have to keep it right for that costume,” she admitted. “The way that Lynda Carter wore it, she was sooo fine. She was amazing. I saw her costume at the Met. Her waist was unbelievable. It was pretty crazy, actually, her proportions.” 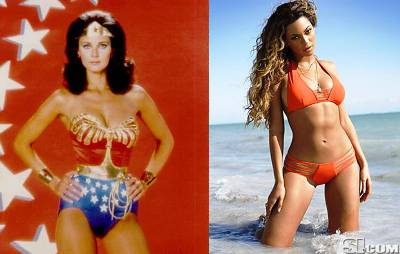