So it looks like Paris Hilton won’t be sitting at the cool kids table anytime soon.

Paris Hilton’s popularity has plummeted. The heir-head, whose show, “Paris Hilton’s My New BFF,” on MTV has low ratings, was booed so badly at the Kress in Hollywood this weekend, she refused to take the stage. Hilton was at a birthday party for designer Christian Audigier’s daughter, Crystal, and was supposed to introduce the Pussycat Dolls. But when Audigier took the stage and yelled to the crowd, “Do you want to see Paris Hilton?” our spy said, “The entire room – which had just cheered when they thought Britney Spears was coming – booed loudly. Paris was practically in tears and left without taking the stage.” Bricks and Stones Gossip

Crystal Audigier’s daddy fashion designer Christian Audigier was just trying to do something nice for his daughter’s sweet sixteen and paid the fabulous Paris Hilton to attend. But apparently Christian didn’t get the memo that Crystal’s friends could care less about Paris Hilton showing up at a birthday party.

Poor little Paris, she no longer rules the playground.

That’s gotta suck – being all cool one minute and booed so hard the next minute that you burst into tears and run out of the room. I wouldn’t really know though, because unlike Paris Hilton, I was never popular (I wonder if my lack of sex tape was the reason). I do vaguely remember people booing at me at one point in my life, however.

These Paris Hilton pictures are not from Crystal Audigier’s Birthday party at Kress, but I felt they needed to be shared just the same. The Pussycat Dolls Lounge at the Viper Room in Los Angeles had their opening last night and Paris was there in her best black rubber – an attempt for whistles instead of boos perhaps? 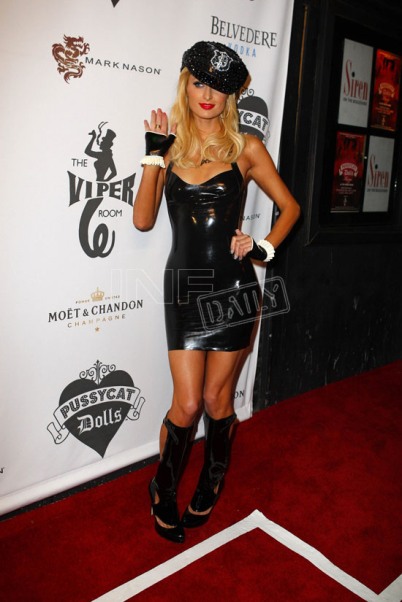 Is it just me, or does it totally look like Paris Hilton is doing the pee-pee dance? And what the hell is up with those shinguard shoes?