Pinup model extraordinaire Bettie Page, suffered a heart attack this past Tuesday and is hospitalized in critical condition. Page’s agent and attorney Mark Roesler said that the 85-year-old is “critically ill,” and would not comment further.

Born in Nashville, Tennessee Bettie Page grew to become one of the most well known pinup and fetish models in history, and is credited with helping to kick off the sexual revolution of the 1950s and 60s.

In her prime, Bettie Page was 5’5 ½”, measured a sultry 36-23-36, and weighed 128 pounds. In January 1955 she was Playboy’s centerfold and pinned to walls in auto garages and military barracks across the country.

Bettie’s numerous contradictions undoubtedly added to her charismatic personality. Nice and naughty, shy and daring, simple and exotic, Bettie shone with a freshness never before seen in the modeling industry. Without elaborate props, costumes, or set-dressings, Bettie produced some of the most beautiful shots to ever grace the covers of hundreds of magazines. Bettie’s smoothly tanned skin, deep blue eyes and coal-black hair with her trademark bangs, were enough inspiration to spark the imagination of even the least experienced photographers. Her “girl next door” look and innocent smile only complemented that explosive combination of features.

Pictures and more at The Infectious Bettie Page HERE. 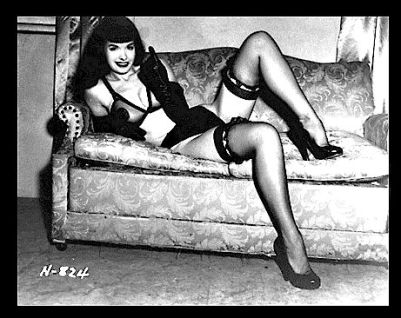