Although it won’t be aired until Christmas Day, the “Walt Disney World Christmas Day Parade” was taped this weekend at Magic Kingdom in Lake Buena Vista, Florida.

This year is the 25th Anniversary of the Disney Christmas Parade and will be hosted by Ryan Seacrest, Regis Philbin, and Kelly Ripa; the event will air on ABC December 25th from 10am to 12pm ET.

“Hannah Montana” star – and the perpetually annoying – Miley Cyrus will kick off the “Walt Disney World Christmas Day Parade” with her very own whiny rendition of “Santa Claus Is Coming to Town” while her equally annoying creepy oily haired father will sing his Christmas single, “Run Rudolph Run.”

If that’s not enough to make you verp, the Jonas Brothers will be there too! The trio will perform their Christmas song, “Joyful Kings,” and High School Musical’s Corbin Bleu gets to sing a Disney Parks original, “Celebrate You.”

The Orlando Sentinel is reporting that Joey Fatone and Drew Lachey will be there, as will Josh Groban, Whitney Houston, and The Harlem Boys Choir.

Personally, I have other things to do on Christmas morning than watch a bunch of tween stars in a Christmas Parade that was taped in the beginning of December. But that’s just 30-year-old me talking; I’m sure if I were a 12-year-old girl I’d feel a bit differently. 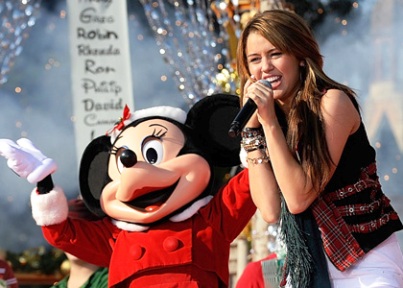